A strong and courageous flower

Achillea, also called yarrow, belongs to one of the most extensive plant families -  the compound floras Asteraceae. This particular variety is characterised by its flat coloured umbels, which have a pleasant fragrance. Available all year round and benefitting from a fresh, natural appearance, Achillea millefolium is the best known variety of this flower.

Yarrow comes in many colours, from salmon to red and from pink to yellow. If you have sharp eyes, you could even find this flower growing wild in the countryside. In the 70s and 80s, this flower was popularly combined in bouquets with thistles and daisies. Another lesser known version is the white Achillea ptarmica, or the wild blackberry, which you can also come across in the wild.

Yarrow is a symbol for being brave, courageous and saying I love you in spite of everything. Achillea comes from Achilles, the warrior hero of the Trojan saga. Both the Dutch and scientific names of Achillea millefolium or yarrow refer to the shape of the leaves: millefolium literally means 'a thousand leaves' and refers to the feathery green-grey leaves. The botanical name Achillea is linked to the Greek hero Achilles, who possessed a wound healing herb that he used in war for himself and his army. That herb was probably yarrow, as in herbal medicine the tannins in the plant are considered to be blood-storing. In the Middle Ages, yarrow was also used as a flavouring for beer and liqueurs. Today, yarrow is only used as an ornamental plant and as an added bonus, it's very attractive to bees and butterflies.

Yarrow grows everywhere in the Northern Hemisphere from Europe to Asia, both at sea level and in mountainous areas up to 3,500 metres. The wild species is limited to white and very pale pink flowers, and the cultivated flowers offer more colour variety.

With these tips you will enjoy this flower for longer: 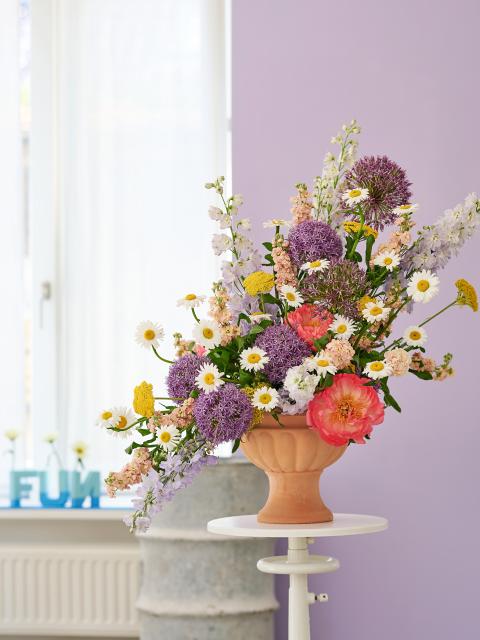 Fashion
Home
Back to top